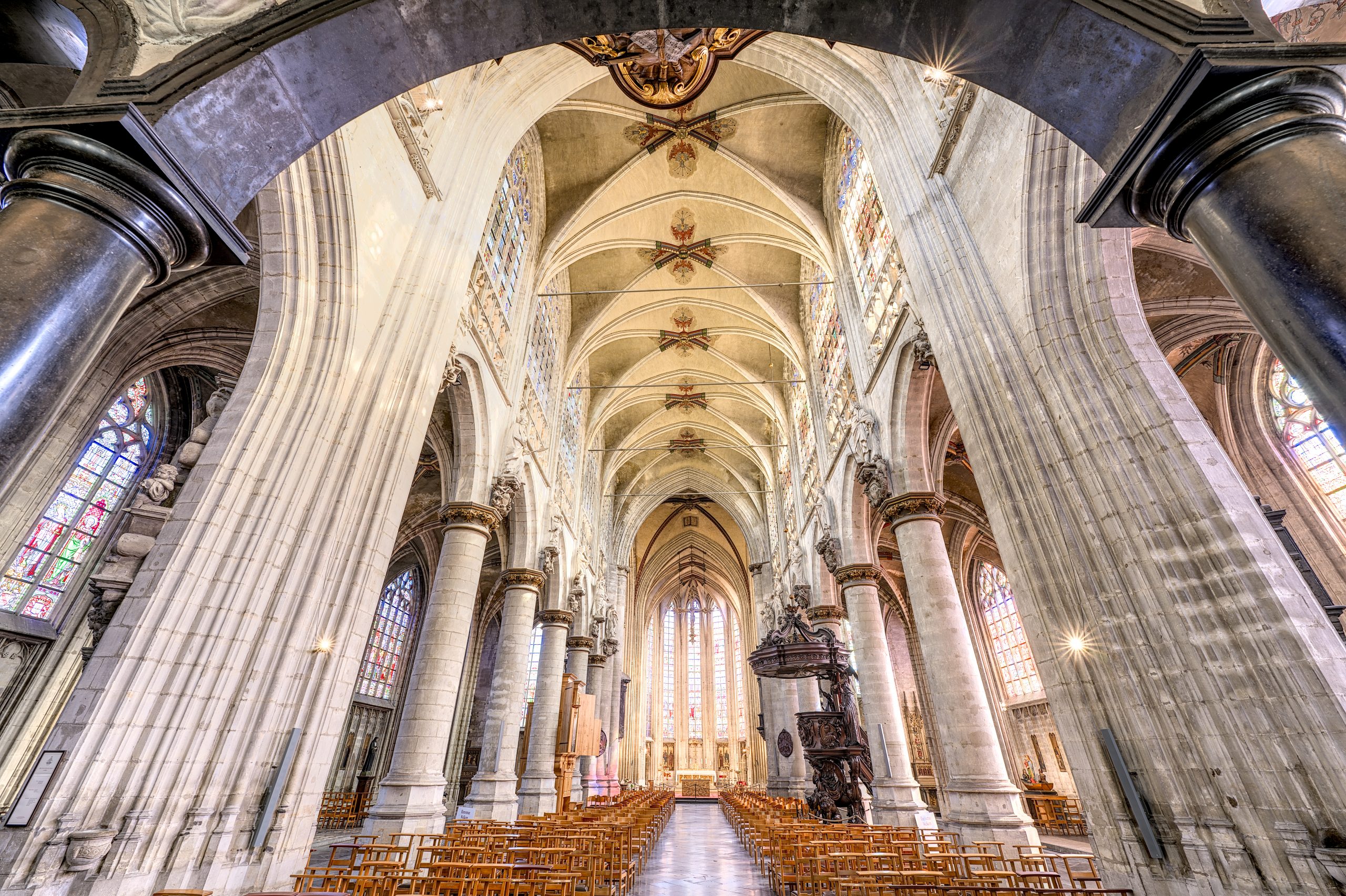 The church of Our Lady at the Sablon is a jewel of the gothic art in in the well-known Brussels neighbourhood of « the Sablon » famous for its antique shops and market and chocolate makers. The church is open 365 days a year free of charge and attracts annually some 500.000 visitors. One can also make a virtual visit.

A Friends of the Church Fund was created within the King Baudouin Foundation to appeal for donations in order to preserve this exceptional heritage and embellish it for the benefit of the many visitors.

Many projects have already been realized thanks to the generosity of friends, others are in progress and still others are awaiting donations. You will find them presented below via the link.

Soon after 1300 AD the Great Guild of the crossbowmen of Brussels receives a piece of land on a sandy hill outside the city walls to build a wooden chapel devoted to the Holy Virgin.

In 1348 a devote woman, Beatrijs Soetkens, sees that a statue of the Blessed Virgin was being neglected. She brought it to Brussels, propelled by a mysterious force along the rivers, the sails of the boat not being deployed.

She was welcomed by Duke John III of Brabant and the miraculous statue was entrusted to the chapel of the crossbowmen, who promised to build a church considering the large number of pilgrims. This is the present day church which is a beautiful example of flamboyant gothic.

In19th century the houses built around it were removed and the outside of the church completely restored.

Every year the statue was carried in a procession around the church; in Flemish Ommegang which means to go around. It gave the name to the prestigious historical procession which still, twice a year, leaves the Sablon church to join the Grand Place in memory of the wealthy reception by the Brussels township of Emperor Charles the Vth and his son Philips the second. The two oaths of the crossbowmen also celebrate each year a solemnity for the Ascension of the Lord in the church.

During centuries the church received an unwavering support of historical families such as the Habsburgs, Thurn and Taxis, Arenberg and several others. One easily identifies the signs of their attachment to the church. The imperial family offered magnificent stained glass windows which unhappily were destroyed by a hurricane.

The Thurn and Taxis which had since 1516 the monopoly of the international postal service throughout Europe and lived in a palace in front of the church built two baroque chapels. The St Ursula chapel is completely made of black marble and decorated by Carrara marble sculptures made by the most prestigious artists of that epoch.

One of the statues, “the Charity” stolen during the French revolution could thanks to the King Baudouin Foundation find its way back to Brussels where it waits the end of the restoration of the chapel to find back its original place.

Numerous historical figures are associated with the church at the Sablon

The church at the Sablon also has a centuries-long musical tradition: Pietro Antonio Fiocco was church organist at the Sablon before becoming the first director of La Monnaie. Musical compositions of Tinel and Gevaert were performed here for the first time. Today three appointed organists and famous singers keep this tradition much alive.

The church is also decorated by many sculptures including Grupello, Duquesnoy, Van Beveren,…. and paintings by Michel Coxcie, Quellin the Elder, Abraham Janssens,…). The church choir has spandrels dating back to the early 15th century which constitute like a medieval comic strip.